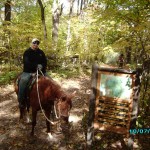 Becky Molitor has been around horses since she was a little girl.  She has been a part of the 4-H horse program in Benton County, from showing as a youth, to an adult leader.  She has been a 4-H certified horse show judge since 1996.  She is also, a state director for the MN Western Heritage program .

She has competed in WSCA since she was 13 years old, and competed and placed at Champ show many times, even taking first in Egg & Spoon in 1998.

She now enjoys competeing in the fine sport of O-Mok-See, driving Draft Horses and getting out trail riding when ever possible. 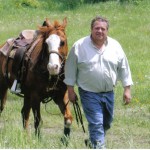 Daryl Sheetz has loved horses since he was a boy, but did not get his first horse until he was 26 years old.

In 1990 he became involved in team roping.  While learning to team rope, he helped out at MN High School Rodeos.  He started competeing in MRA rodeos in 1993, and qualified for the MRA finals in team roping in 1994 & 1995.  He now enjoys competeing in local jackpots and teaching 4-H members to rope in the MN Western Heritage program.  He has been a certified judge and instructor for Western Heritage since 2004.

Daryl has enjoyed working with draft horses since 1988, and now has found a team of his own.  He looks forward to giving rides with them.  He also enjoys competeing in O-Mok-See and trail riding.